Roasted in 100% Australian Honey to create an irresistible sweet treat, Morgan's are a favourite artisan producer. Made in Sydney. Crunchy Australian almonds, expertly roasted in a classic French Vanilla flavour by artisan foodies at Morgan's. Made in Sydney. Made with all Australian ingredients and crunchy macadamias this shortbread is a classic treat that everyone will enjoy. 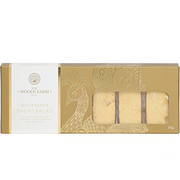 Rich and crumbly shortbread made with 100% Australian ingredients and using the finest creamy butter. Best enjoyed with a cup of tea. 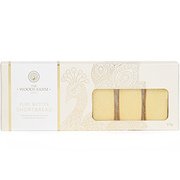 Tasty Peanut Brittle made with 100% Australian ingredients, truly irresistable to anyone that loves a rich caramalised toffee. Crunchy roasted cashews encased in rich and buttery caramelised toffee. Made in Australia. Flavours of buttered toast, brioche and biscuit to complement the ever present fine acidity and flavour length that is trademark Veuve. Australian owned and made to ensure the finest in flavours and quality from the team at Ernest Hillier. Made in Australia by premium chocolatiers, this exquisite chocolate selection is purely delightful. 88% cocoa, this is a chocolate of rich darkness with notes of delightful cherry. A superb tasting Apricot Conserve made with Armagnac Cognac. Pair it with cold meats or have it on sourdough. Made in Australia. Kick back and indulge a little with the Luxury Chocolate & Veuve Hamper, perfect for sharing with friends, family, or a significant other.

Luxury, thy name is chocolate and champagne! Treat yourself or others to a variety of delectable, almost sinfully tasty chocolates, pastries, and wine. It won’t be long before you’re enjoying yourself, relaxing, and allowing yourself time to celebrate.

The Luxury Chocolate & Veuve Hamper is the perfect way to celebrate an engagement, wedding, or wedding anniversary, because it’s just the right size to share with a loved one on a special occasion.

And we have great news: the Luxury Chocolate & Veuve Hamper qualifies for free shipping Australia-wide!

Please Note: Due to seasonal variations and exclusivity of our stock, items in hampers are occasionally substituted for products of the same or higher value and quality.

FREE Delivery On Orders Over $99

Why is leather the traditional gift for 3rd anniversaries?

Leather is a tough material and has been used as clothing and cover for centuries. Leather provides protection from the elements and from the wild. Just as leather protected our ancestors as they lived and hunted, a marriage, now strengthened by three years, provides protection and safety for both spouses.

Why is crystal/glass the modern gift for 3rd anniversaries?

Crystal is not only ornate and beautiful, but it’s transparent. Spouses should be open and honest with each other, and should appreciate the beauty of the relationship. Another school of thought suggests that because crystal reflects light in stunning and elegant ways, the crystal is a reminder of how the marriage reflects on the couple and others outside the marriage. A good relationship and a good marriage can touch the lives of many, just as the light reflecting from crystal can be seen and appreciated by others.

What flowers are associated with the 3rd anniversary?

The flower associated with the 3rd wedding anniversary is the Fuchsia. Fuchsias are associated with love and entrusting love. Both spouses must give their love and trust to each other in order for the marriage to grow.

The Fuchsia also symbolises taste. With each year of marriage, the relationship deepens and becomes more complex and finer.

What precious gems are appropriate for the 3rd anniversary?

You may also want to buy jewellery for your loved one on the 3rd anniversary. Though some anniversaries suggest giving wedding anniversary gifts that include jewellery, it doesn’t mean you have to wait until that anniversary!

No matter how you choose to celebrate your 3rd anniversary, and no matter what wedding anniversary gifts you exchange, congratulations! Your marriage is now sturdier and more beautiful than ever.