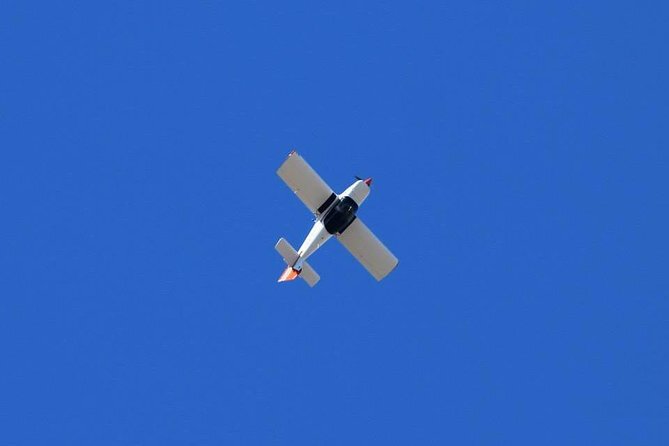 Treat yourself to the ultimate aerobatic flight training experience in Sydney. During this 45-minute lesson, you'll learn how to loop and roll in an aerobatic training aircraft—the Robin 2160i—during a flight with a pilot-instructor over Sydney.

After your orientation and safety briefing you will strap into the aircraft and taxi for takeoff.

No prior flying experience is required! You will learn everything on the day.

On the way home, you will have the opportunity to see what the Robin 2160 aerobatic trainer is really capable of, with your instructor demonstrating the aerobatic capability of the aircraft with speeds up to 325km/h and G forces up to +6G’s!. No previous flying experience is required.

Upon arrival at the Bankstown Airport, your instructor takes you to your aircraft and provides a pre-flight briefing on various aspects of your flight, including how to operate the controls and safety harness. After strapping you in, your pilot then starts the engine and taxis for take-off.

Once you're in the air, you'll be shown how to fly level, climb, turn, and descend as you make your way over the western suburbs of Sydney. In the dedicated training area, your instructor teaches you how to perform the aerobatic maneuvers of looping and rolling—like your very own roller-coaster ride controlled by you.

On the way back, you have the opportunity to discover what the Robin 2160i aerobatic trainer is really capable of as your instructor demonstrates its range with speeds up to 202 mph (325 kph) and G forces up to +6Gs!

Peter was so professional and put me at my ease. I wasn't nervous at all. Had an absolute ball would recommend it to everyone.

I did the U Fly aerobatics flight experience last Thursday with Doug and it was the best thing I've ever done. I tried skydiving the day before and, at the time, that was the best, but this completed a dream I've always had. Ever since I was young I always wanted to fly a plane, but never thought it would be possible. While planning my 50th birthday trip to Bangkok and Sydney I noticed this offer and was amazed that someone would actually allow me to fly a plane I always assumed that was impossible.

I originally thought it would maybe be for a few seconds or maybe a minute, but I flew most of the flight myself. Doug first let me get a feel for the controls so I could feel how responsive it was and I practiced dives, climbs, and turns to each side. He then demonstrated how to do a loop and then handed it to me and i got to do a couple by myself. Next was a demo of a barrel roll to each side and Doug then again turned it over to me to do a few on my own. He concluded by doing a hammerhead and the zero g's was amazing much better and longer than any roller coaster I've rode. We concluded with me flying some more on my own and Doug then landed the plane nice and softly.

I can't wait to see the video from this as I don't completely remember it all because I was too busy smiling and loving it all. Doug mentioned that more than a few people get sick, but that thought never crossed my mind. I was actually amazed how easy it was and definitely nowhere near the extremes I imagined prior to taking off. Definitely a day I'll never forget and absolutely worth every penny and a lot more. Still smiling thinking about it.